The Salmon River Medical Internship in Stanley, Idaho has assisted College of Idaho students searching for experience prior to Medical school since 1975. More than 50 students have come through the program and many are successful in the medical field today. Marie Osborn, the first Administrator for the Salmon River Clinic and Idaho's first practicing Nurse Practitioner, created the internship with her son, John Osborn. The story behind the clinic and the Stanley Clinic internship is a testament to the hard work Marie Osborn has put into improving the health of isolated central Idaho communities. An education fund is being created in her name to honor her pioneering work in health care and her commitment to the College of Idaho students pursuing careers in medicine.

The Marie Osborn Salmon River Medical Internship Fund will be awarded to hard-working students with a commitment to caring for others and seeking an extraordinary experience in rural health care while advancing their medical careers.

How it all started

Marie Osborn obtained her BSN degree in 1953, married Cal Osborn, and raised their five children - Cal Jr., Jerry, John, Melinda, and Debbie. She started the clinic in Stanley after vacationing with her family in the Sawtooth Mountains and came face-to-face with the lack of medical services in outback Idaho (From Stanley, the closest medical care is 60 miles away in Ketchum, Sun Valley, or Hailey, over 8,700-foot Galena Pass - an hour in good weather and much longer during blizzards).

Marie, with the support of the Stanley community, teamed up with physicians in the Wood River Valley. In May 1972, a new clinic opened in Stanley with Marie as the sole care provider covering nearly 6,000 square miles. To update her skills, Marie attended the University of Washington - Harborview where she earned a certificate as an Emergency Nurse Practitioner; then in 1976 attended the University of Utah's first-ever class of nurse practitioners, earning a second certificate as Family NP. Marie is Idaho's first nurse practitioner.

For the next 27 years, until 1999, Marie provided family and emergency medical services for Stanley and the region - available 24/7 for emergency care. Beyond the usual colds, earaches, and cases of pneumonia, Marie treated poison ivy exposures, fish hook injuries, heart attacks, strokes, emergency labor and delivery, injuries from skiing and snowboarding, automobile and bicycle accidents, and falls while hiking and mountain climbing.

As Marie’s dedication to the clinic increased, so did the clinic’s resources.  Appreciative community members donated a CB radio for Marie’s car. The local Armada Hotel had an emergency contact system installed, and an anonymous donor installed a line in Marie’s home. Later, the Robert Wood Johnson Foundation funded the radio system that connected the Stanley-based system to the Idaho EMS Network.

During the 1970s and 1980s, local and statewide support for the Stanley clinic and Marie's work drove Idaho policies on funding rural clinics and prescribing medications, while clarifying the role of nurse practitioners in Idaho health care.

Two years after the clinic opened in 1972, Marie’s son, John Osborn, approached Dr. Lyle Stanford of the College of Idaho with a request to establish a pre-med internship program at the clinic; Dr. Stanford agreed. Joining John that first summer in 1975 were three other College of Idaho students: Ken Harris, Mike Nowling, and Patrice Gibson. Thus began the Stanley Internship.

The Clinic in Stanley is now called the Salmon River Clinic, and the internship program that began with College of Idaho students in 1975 continues to this day. Each year the Salmon River Clinic supports two C of I interns to aid in the surge inpatient care needs during the Sawtooth summer tourism season. This internship has become so vital to the clinic that there is now an apartment built to house two student interns every summer in Stanley.

The college interns assist inpatient care - from taking patient’s vitals and helping with patient histories to lab support. This experience is essential to the interns as many students are unable to experience hands-on work until medical school. The interns may also receive training as emergency medical responders (EMRs) which allows them to provide basic care in emergency situations.

In 1999 after nearly 30 years of service, Osborn handed over her responsibilities of 24/7 patient care in the Sawtooths and Salmon River country. Moving closer to family, Marie continued providing care for patients in Boise until 2011 when she retired her stethoscope. 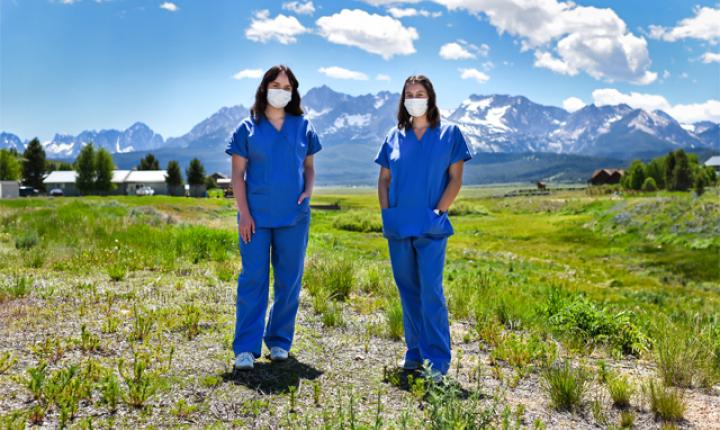