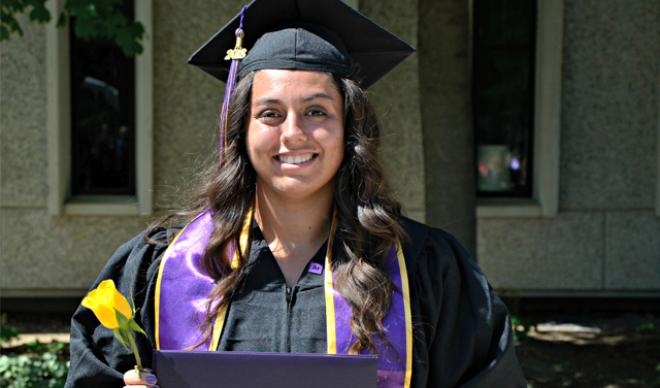 A grant from the National CMV Foundation is allowing Claire Otero ’18 to continue research into Cytomegalovirus, the most common congenital viral infection and the leading non-genetic cause of hearing loss.

Before your eyes glaze over, let Otero, who is closing in on a Ph.D. in Pathology from Duke University, explain why this isn’t garden-variety research.

“This research has been going on for more than 40 years and we still don’t have something that is licensable,” said Otero. “It has been designated as a top-tier priority by the National Academy of Medicine.”

Translation – Otero’s work has shown enough promise that she’s caught the attention of a national foundation that is trying to topple something considered among the top priorities in medicine.

CMV is a virus that can be passed by a pregnant mother to her unborn child. The virus impacts one in 200 babies. The virus can cause neurological defects including hearing loss and, in a worst-case scenario, stillbirth. The research Otero is currently involved in is called a proof-of-concept study. These studies are typically early-stage clinical trials conducted to understand whether a product or process produces the expected response in individuals.

Otero is finishing up her Ph.D. work at Weill Cornell Medicine in New York City. Her lab collaborates with labs at Tulane University, the University of California-Davis, and others on the CMV research.

“There’s been progress,” Otero said. “For CMV, we’re having to evaluate different kinds of antibodies or other kinds of immune responses to figure out if a vaccine is working well in the context of the immune system.”

Otero’s path to research traces back to The College of Idaho when she worked with Dr. Sara Heggland in her INBRE lab.

“That specific experience, working with Dr. Heggland and doing the summer internship and biology honors thesis during my senior year, really opened a lot of doors for me,” Otero said. “I am 100 percent convinced I would not have gotten into grad school immediately following (my) undergrad (education) if I hadn’t had that research experience.”

She continued by explaining the importance of undergraduate research – something the College firmly believes in and provides opportunities for students – which fosters critical thinking skills and creates a foundation for students moving forward in scientific fields.

“All the INBRE labs at the College and all the research labs, in general, are so amazing,” she said. “They (the labs and educators) do such a great job of getting you to think scientifically and getting you in the habit of doing the things you’re going to need to do to get more into research.”