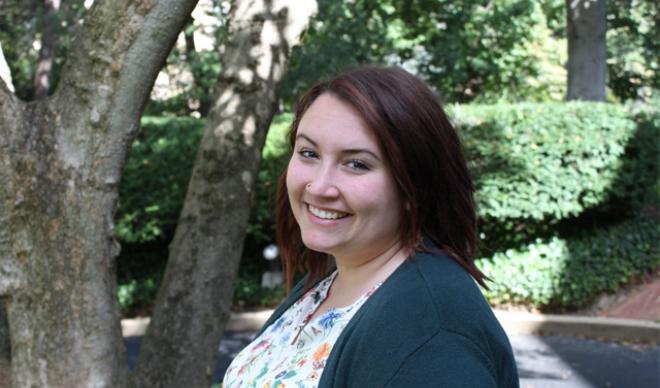 Courtney Indart ’15 says she has been involved with Model United Nations events since she first came to the College. First as a student participant and then, after graduating, as a volunteer staffer.

This November, Indart will fill the biggest role at the organization’s event in Washington, D.C. She is the event’s Secretary-General.

In short, Indart will lead a volunteer staff of 20 in preparing for (and then executing) the Model UN event in November. That means hiring and training staff, prepping and reviewing materials, and leading the event itself which will feature a thousand students from the United States and beyond.

“I’m really excited,” said Indart, who majored in international political economy. “Getting to this point really meant a lot to me.”

There are two primary Model UN events in the United States. The event in the nation’s capital and one in New York City. Colleges from across the globe will send teams to the events and, when there, be assigned a country to represent as though they were that country’s United Nations delegation. For instance, in the 2020 event, the team from The College of Idaho represented the small Caribbean nation of Haiti, which shares an island with the Dominican Republic (the Dominican Republic was represented by Berry University in Georgia). During the event, the College’s Model UN team isn’t The College of Idaho, it was Haiti. The delegates represent the thoughts and opinions of Haiti during the competition.

“It was a no-brainer when I was asked if I wanted to take on the Secretary-General position this year,” Indart said. “Knowing people are coming to Model UN invested and ready to have these conversations is the whole reason we do it.”

And she’s doing it for free. She’ll maintain her regular, full-time job as an information officer for the Meridian International Center in Washington, D.C. while fulfilling her obligations as Secretary-General as a volunteer. She began preparing for the 2021 event just a couple of weeks after the conclusion of the 2020 event, but the time expenditure is well worth it.

“I love the conference. I really enjoy working with the students,” Indart said, whose first experience with the Model UN came in 2011. “I’ve made friends who are now connected all over the world because of this.”

Dr. Robert Dayley of the Political Economy Department is in charge of the College’s Model UN delegations. He says the College has participated in Model UN competitions for over half a century and has developed a reputation that exceeds its physical size.

“Certainly, students from across the world, yeah, we’re certainly respected,” Dayley said when asked if Model UN performances led to added exposure for the College. “This is an international competition. There are students from all over the world who come to this.”

Dayley says Indart is the first alum from The College of Idaho to earn an opportunity to be the Secretary-General of a Model UN event. And, since there are only two events, being a Secretary-General in a given year is quite prestigious.

“I was so proud when they won the outstanding delegation (award),” Indart said. “It was so exciting. They really deserved it.”

Indart and her staff will spend the next several months researching, writing, and reviewing the material that delegations will use in the upcoming event. Once those are finalized, she’ll begin training her staff in anticipation of the delegations’ arrival in November. She says the plans are for a full, in-person event at this point but she doesn’t think of her role differently whether it is in-person or virtual. The students are engaged and come ready to compete, she says, which means “I get to do the really fun stuff.”