C of I science students present at Geological Society of America 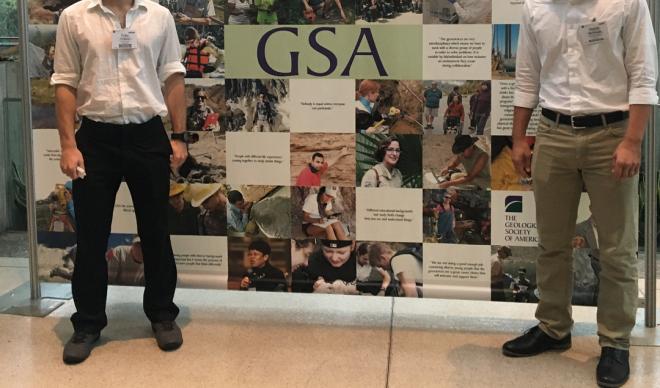 Neither Jake Bowman nor Tyler Truksa originally had much interest in geoscience. However, after a full summer as research assistants under C of I geoscience professor Jaime Goode, the two juniors found themselves presenting their original research at the Geological Society of America’s 129th Annual Meeting in Seattle, Washington between Oct. 22-25 — one of the largest meetings of geoscientists in the country.

“I’ve never experienced anything quite like it,” Truksa said. “But once I got there and I started doing my presentation, I felt at home. Even though I don’t have a Ph.D in geology, I knew my own research enough to talk knowledgably about what I had learned with people much more experienced than me.”

The two science students each had their own reasons for becoming Goode’s research assistants. Bowman, a biology major, had been intrigued by the biological aspect of Goode’s work in researching how wildfires affect the salmon spawning habitats in Idaho. Truksa, a mathematics-physics major, wanted the opportunity to explore the field of geophysics, a challenging field that Albert Einstein is said to have quit after four days of study before going on to discover the theory of relativity.

Although they came from different fields of scientific interest, there was something both Bowman and Truksa agreed upon: drones were cool.

“We didn’t know exactly what we wanted to do, but we liked the idea of using drones to collect data,” Bowman said. “Dr. Goode said that was cool, too, and she told us which metrics she wanted for us to measure. After that, we knew what direction we wanted to take.”

Following their first meetings in June, the pair spent most of July doing field work along stream beds in Stanley and Lowman, Idaho. The pair were tasked with determining the viability of a photographic range imaging technology called Structure from Motion (SfM) to quantify sediment mobilization within streams following the 2016 Pioneer Fire that burned nearly 260 square miles within the central Idaho Batholith.

SfM software allows researchers to create 3-D images from a collection of 2-D images, which can be taken from a wide range of digital cameras, including smartphones. Bowman and Truksa spent their time in the field gathering as many photographs as they could, using SfM to track the buildup of sediment, wood and debris occurring in the streams.

“It was like one big camping trip with lots of science,” Truksa said. “We marched up and down stream beds, took longitudinal profiles in our waders, taking as many notes as we could, and eating a lot of fish tacos.”

With Dr. Goode’s encouragement, the pair traveled to Seattle to present their findings to the GSA’s meeting, which attracted around 7,500 people of both national and international origin. As undergraduates with little experience in geoscience aside from their research, they suddenly found themselves surrounded by experts in the field, presenting alongside scientists with over 30 years of experience in some cases.

Despite initial nervousness, the pair came together to present their findings with confidence, receiving positive feedback from those who attended their respective presentations. Following Bowman’s presentation, interest from the attendees was significant enough that the question and answer period at the presentation’s completion ran long and needed to be cut off before all questions could be answered.

“People were definitely interested in how the project could be propelled forward from what we found,” Bowman said. “It was easy to see that people were engaged with what we were doing, and I think that’s the best part of being able to go to a conference like that where everyone in attendance wants to know more about your work just as much as you do.”

Bowman and Truksa will again present their research Nov. 9-10 at the Murdock College Research Conference in Spokane, Washington. They will be attending with a group of other C of I students, all of whom have had their projects funded by grants from the M.J. Murdock Charitable Trust.

Both students may not be transferring their energy toward more geoscience research in the future, but both said they grew as students from the opportunity to participate in scientific research outside their regular realm of expertise. Truksa said he loved being able to transfer what he learned in a controlled classroom setting toward work in the field, while Bowman said the research experience has given him more of an interest in environmental science ahead of his previous plans to enter medical school.

“I think that in general, whether it’s science or math, it’s good to know how to conduct research and the ability to present findings or knowledge that you have to other people,” Bowman said. “I think this experience gave us both that.”

The College of Idaho has a 125-year-old legacy of excellence. The C of I is known for its outstanding academic programs, winning athletics tradition and history of producing successful graduates, including seven Rhodes Scholars, three governors, four NFL players and countless business leaders and innovators. Its distinctive PEAK Curriculum challenges students to attain competency in the four knowledge peaks of humanities, natural sciences, social sciences and a professional field—empowering them to earn a major and three minors in four years. The College’s close-knit, residential campus is located in Caldwell, where its proximity both to Boise and to the world-class outdoor activities of southwest Idaho’s mountains and rivers offers unique opportunities for learning beyond the classroom. For more information, visit www.collegeofidaho.edu.