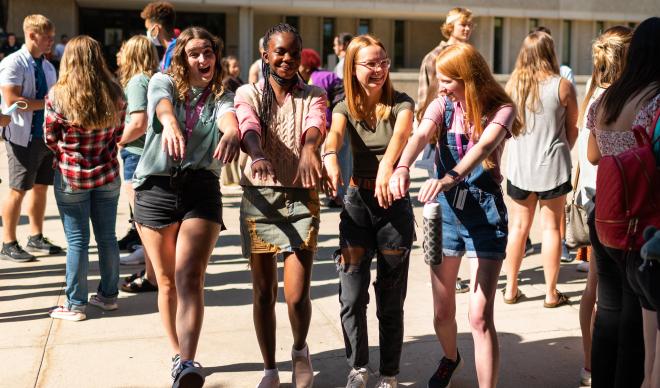 One of the largest incoming classes in the history of The College of Idaho has pushed total enrollment to its highest-ever point for the 2021-22 academic year.

The College welcomed the second-largest class of freshmen in the history of the school – 296 students – and the total number of new students on campus, including transfers, is 338, which is the third-largest ever.

“This year marks the fourth consecutive year of enrollment growth, and to set an all-time record is truly remarkable. It clearly demonstrates the confidence that students and their families have in the College, and the value they place on exceptional academics, a liberal arts foundation, and the small, close-knit environment fostered here,” said Brian Bava, the College’s Vice President of Enrollment. “I am extremely proud of our team and what they accomplished during a challenging year, and I look forward to continuing to build on this success during the next recruitment cycle.”

Among the incoming freshmen, the average grade-point average was 3.78 while the average ACT score was 25, well above the national average of 20.6, as reported by U.S. News & World Report for the 2020 academic year. Both of those numbers represent a continuing upward year-to-year trend dating back multiple years.

Nearly 60 percent of the student population hails from the state of Idaho, with Oregon, Washington, and California each represent approximately five percent. Internationally, The College of Idaho currently has 218 students representing 92 foreign countries, which is nearly 20 percent of the student body. That percentage is one of the tops in the nation, ranking no. 10 by U.S. News & World Report among all national liberal arts colleges.

Nepal (13), Eswatini (formerly Swaziland, 12), South Africa (8), and Ethiopia and Iraq (7 each) are the five foreign countries with the most students currently enrolled at the College.