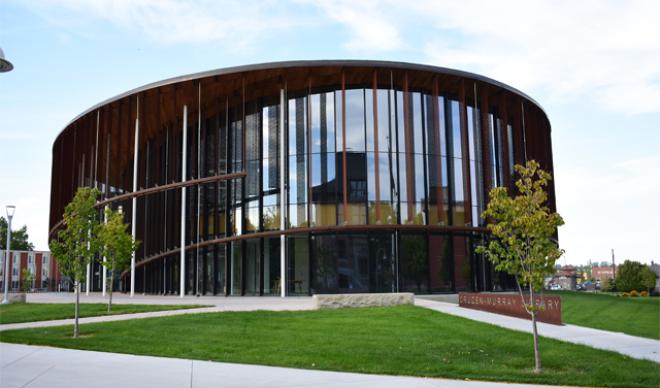 Cruzen-Murray Library on the campus of The College of Idaho was one of five libraries to earn 2022 AIA/ALA Library Building Award for excellence in architectural design from the American Institute of Architects (AIA) and American Library Association (ALA).

“This award has special meaning to me personally because I have had a toe in both professions. As an undergraduate student I studied architecture before changing directions and attending graduate school in Library and Information Science to become a librarian,” said Christine Schutz, the director of Cruzen-Murray Library. “For me as a librarian, the Cruzen-Murray Library has represented an opportunity to re-imagine the possibilities for a library on a small liberal arts college campus and many changes are still ongoing as we grow into the space.”

In order to earn this distinction, a library is judged by a seven-person committee on its design achievement, including a sense of place, purpose, ecology, environmental sustainability, and history. Cruzen-Murray Library, a three-story, 60,000 square-foot facility, includes both online and traditional print holdings of books and journals, as well as private and group study areas, a 24/7 study space, multimedia classrooms, a café, and spaces for readings, lectures, and exhibitions. The building was designed by Phoenix-based architectural firm Richärd Kennedy Architects, a nationally recognized group known for its work with libraries and sustainable design. The College broke ground on the library in 2016 and it opened its doors to the campus community in February of 2018. Kreizenbeck Constructors of Boise completed the construction.

The other four libraries to share this recognition with Cruzen-Murray Library are:

“The entire Cruzen-Murray Library project, from programming through construction, represented a once-in-a-career opportunity to bridge these two passions of mine,” Schutz said. “This award is very much the icing on the cake.”