Hamburgers and Hot Dogs for Hope 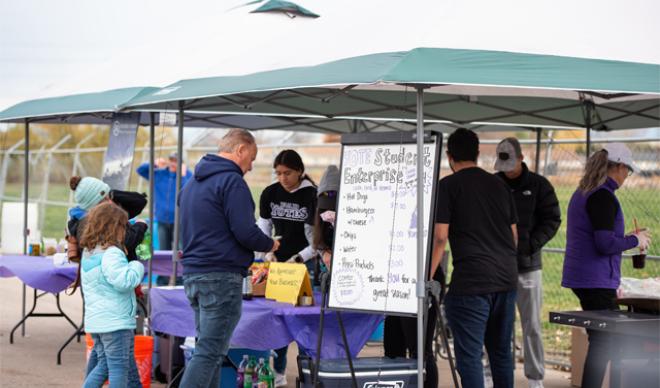 It’s a common sight on a Saturday afternoon at Simplot Stadium to see people huddled around concession stands, buying hot dogs or hamburgers to eat as they watch the College’s football team compete.

Some who did so, perhaps unknowingly, prepared students for life after graduation and also helped make life a little bit better for kids they may never meet.

Business and Accounting Capstone: Senior Seminar (Business 493) is one of the last classes business students may take before graduation. It’s a practical, hands-on opportunity that is more than a classroom lecture environment. This fall, the class chose to operate a concession stand at each of the school’s home football games at Simplot Stadium and donate the money to charity.

“We were figuratively thrown into the fire at the start of the term, as we met for the first time on a Wednesday and the first game was that Saturday,” said Nathan Burman, a senior majoring in business. “But we learned early on that if we each brought our own expertise and skills we could operate very efficiently.”

The class’s 13 members were divided into three groups: finance, inventory, and operations. Once those groups were set, the students dove in and went to work. They worked with Pepsi and Double R Ranch to get supplies, sold the food at a stand set up at the east end of the stadium, and after each game, met to go over results and begin preparations for the next game.

“One purpose of the Business Capstone Seminar is to offer students practical application of business concepts and theories,” said Lori Tucker, the professor who is instructing the course. “Through this project, students not only gained valuable practical experience, but they were also able to contribute proceeds to those in need.”

Burman said the group is still finalizing numbers but raised roughly $3,700 that will be donated to local non-profit group BACON for Hope, a branch of a popular Boise restaurant that helps raise money for the Hope House in nearby Marsing, Idaho. In its own words, Hope House “exists to provide a home for children who are emotionally impaired, developmentally disabled, and/or come from disrupted adoptions or dysfunctional families.” The operations for BACON for Hope are managed by Gibson Berryhill ’19 and it has completed multiple upgrades at the facility near the Snake River.

“I talked with Gibson and their next project is solar power at the Hope House,” Burman said. “Our donation will likely go to that project and we are all very excited about it.”

The project, though small, gave the students a hands-on glimpse into business operations.

“Although we were operating a small food tent, we were performing many of the same tasks that a major corporation would,” Burman said. “At the end of the day, a business only runs as well as the people in it are passionate about what they do, can have constructive discussions, and implement decisions efficiently.”

Even though much of the work took place outside of the classroom, it was still very much a learning environment.

“Professor Tucker purposefully gave us a lot of space to operate as we desired, which at the beginning was a little stressful,” Burman noted. “But ultimately we learned a lot from it and by the end performed our tasks at a high rate.”