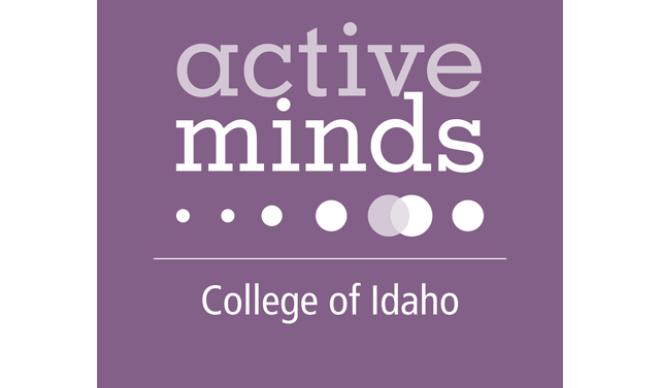 Natalie Davison, the College’s interim Director of Health and Wellness, is a strong advocate for mental-health awareness and education. So, at the end of a class she was speaking to about the topic last spring, she mentioned Active Minds – a national non-profit brand that did not have a presence on the College’s campus.

That comment resonated with Lily Archuleta. As a result, Active Minds is now an active presence on the campus at The College of Idaho.

“Everybody has mental health and everybody needs to care about it,” said Davison. “Self-care isn’t optional for any humans, even the most efficient and positive humans.”

Archuleta, a junior who is majoring in psychology, is the club’s president.

“We just got recognized as a local chapter for the national program in September,” she said. “The process is a long one.”

Archuleta says she has spent a lot of time this fall getting to know Active Minds’ programs and resources. One of the most popular tool kits offered by the program is called V.A.R., which stands for Validate, Appreciate, Refer. The kit helps people recognize when it’s more than just a bad day and what can be done when that happens. An important piece of the puzzle, she says, is being able to get people the help that they need.

“People feel guilty taking advantage of the resources that are available,” Archuleta said. “I think the more we talk about it, the less of a problem we’ll have with it.”

As such, Davison says the club intends to be more about larger, outward-facing public events versus smaller, inward-facing club meetings.

“It’s going to be a lot of programs and more event-based. Less of actual getting-together as a club,” Davison said. “It’ll probably be just getting together to plan the bigger events around campus.”

Archuleta has already attended the club and organization fair during Welcome Week and also had an informational table at the health fair on campus. The net result is about 20-25 active members on an e-mail list - “a virtual brainstorming group,” Archuleta calls it – and a lot of great ideas flowing back and forth. The goal is to have programs or events monthly in order to keep the topic of mental health and the importance of maintaining it in the forefront. There are plans in the works for a series of de-stress events before final exams next month and Archuleta has also applied for a major Active Minds event called “Send Silence Packing.” The national center brings the event to campus, which includes a truck full of backpacks, with the goal of reinforcing the realness of mental health challenges and the importance of tackling those challenges.

The timing for such a club on campus was right, according to Davison and Archuleta, as the campus community re-acclimates itself to on-campus learning as the country works to defeat the COVID-19 pandemic. The response has been strong. A sensory room has been put together in the Wellness Center in Hendren Hall, a quiet and calming place for people who need a break, and others are taking note of the message Active Minds is spreading.

“The amounts of other clubs and professors who have reached out to me is amazing,” Archuleta said. “So many groups have said, ‘hey, we hear you’re doing this, let’s do something together.’”

The College is one of three in Idaho to have active chapters of Active Minds (Lewis-Clark State and the University of Idaho are the other two). For more information, visit the Active Minds national website or contact Archuleta.

Class of 2022 Shifts from Students to Alumni at Commencement
Networking, Collaboration Targets of Business & Accounting Department Conference
In the News
Neto Scores Different Kind of Win at Entrepreneur Challenge
Mentorship through Coding for 2022 Davis Peace Project
View All News