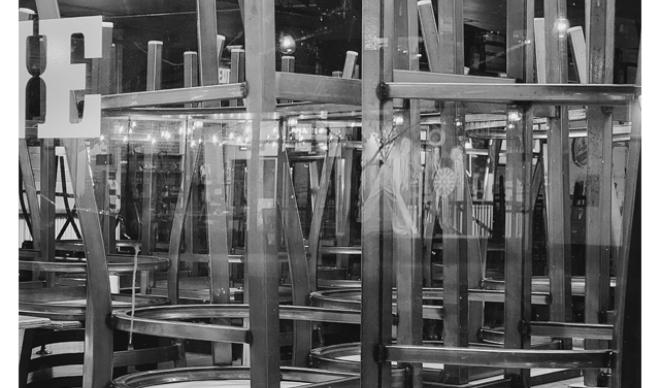 Our faculty at The College of Idaho is among the best in their chosen fields anywhere. And most of them are quite accomplished in several areas. For instance, English professor Sue Schaper currently has a photo gallery, Disappearances, on display at the Rosenthal Gallery of Art at Blatchley Hall. Read what the gallery is about in Professor Schaper's own words:

Disappearances originated during an early morning walk when I came across a grouping of chairs clustered beside a dumpster near railroad tracks running through late summer cheatgrass.  Wildfires to the west seared the sky dull orange and tainted the air with acrid haze.  The chairs were gathered as if in casual conversation, biding their time in familiar social comfort while awaiting the inevitable.  Although those chairs do not appear in this exhibition, they stirred my interest in the number and variety of abandoned chairs haunting alleyways and parking lots.  A residual animate presence lingered about them; they were not quite yet lifeless.  In the wake of a global pandemic during which seclusion and mortality made us acutely aware of vacant places, these chairs seemed to express both departure and memory.

Observant now of vanishings, I recognized other forms of evanescence in my daily walks.  Winter occasioned reflection on ice’s mutability.  Solid ice disappears into liquid and steam; its fragility sets into motion marvelous passages.  Ice is a traveler, no wonder then, that its singular patterns evoke voyages through distance and time.  In the photographs I call icescapes, I discovered microscopic intimacies, dreamlike aerial surveys of ancient earthworks and nomadic parachutes gliding to earth, telescopic atlases of dead and dawning stars.

In early springtime, disenchanted with dark and chilly mornings, I began to seek novelty in the artificial lights of neon signs and infrequent passing cars in the deserted streets.  Window reflections briefly fused interiors and exteriors, an impossible no man’s land fleetingly observed, never breached.

As mornings brightened, this emerging interest in transient impossible places extended to surreal landscapes.  A weathered strip of plastic, found along the railroad tracks where I had discovered the doomed, waiting chairs the previous August, invited an experiment confounding the delineation between earth and sky.  Using layers of loosely attached cling film, I adapted the traditional botanical print into hallucinatory images, dissolving solid forms under the broadest of daylights and disclosing apocalyptic dusks in the noonday sun.

The photographs in Disappearances are grounded in loss and dissolution—the pandemic, stark environmental vulnerability, a year of reckoning with family members’ accelerating aging.  Yet searching for the moments which make these images is both somber and exhilarating.  For an instant, solid forms and transient elements of seasons, of weather, of shadow fuse before me in spontaneous coherence and significance.  Although the import of my work is often sobering, for reasons I can’t quite explain, even to myself, I find affirmation in these moments of dark lucidity. Perhaps it is that although so much of my work recognizes impermanence, as long as there is something new to see, destruction is countered with creation.  Vision and imagination, after all, initiate restoration and generation.

Melchiorre Invited to Join National Marketing Board
In the News
Evans Becomes Eighth Rhodes Scholar from The College of Idaho
Policy Forum Unites Ideas, Encourages Discussion
In the News
View All News