Raptosh Joins Others to Create Book of Poetry 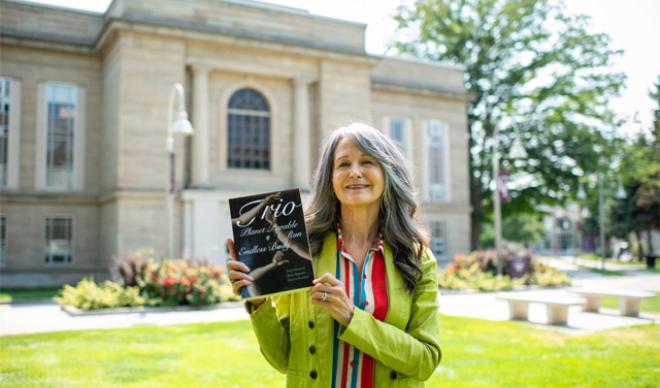 Diane Raptosh ’83 has published several books and earned significant honors for her poetry. But her latest endeavor, “Trio,” proved to be a different experience as she’s one of three authors of the book recently published by Etruscan Press.

“Trio is a great example of the vast array of topics that poetry enters into,” said Raptosh, who serves as an English professor at the College. “Together, they harmonize nicely.”

Raptosh had submitted a book, “Run: A Verse-History of Victoria Woodhall,” to be considered by Etruscan Press. That’s when Dr. Phil Brady, the executive director of the press, had an idea. He proposed taking Raptosh’s submission and combining it with two other entries Etruscan had received. So Raptosh discussed the idea with Karen Donavan (“Planet Parable”) and Daneen Wardrop (“Endless Body”) and decided to work together.

“We realized the incredible harmonies and complementaries of each book,” she said. “We found that Phil had a really precise eye in noticing that the books seemed to belong together.”

You can find the book on Amazon.

The topics are woven together through the poetic form of the cento, whereby a writer arranges lines plucked from other poets’ work to create new poems. Placed strategically before each distinct book, the centos served to bridge the three collections bound within “Trio.”

Raptosh said she found the experience refreshing since she had two people to talk to about the project as she worked. She knew of Donovan and Wardrop prior to collaborating on “Trio,” but hadn’t met them. She said the collaborative effort is a newer trend in poetry but understandable, given the volume of people looking to publish poetry.

From Etruscan Press – “How do three collections of poetry blend together to make something greater than the sum of their parts? Karen Donovan’s Planet Parable begins with a woman using a backhoe to dig up a meadow and ends with a divine purge, telling the genesis myth backward to arrive at another beginning. Run: A Verse History of Victoria Woodhull, by Diane Raptosh, brings to life one of America’s most controversial suffragists, Victoria Claflin Woodhull, who was the first woman to address Congress and the first to run for U.S. president. And Daneen Wardrop’s Endless Body traces a daughter’s loss of her mother, and the turning from loss to the arrival of that daughter’s own daughter.”

Sadly, Wardrop passed away prior to the book being published, something that Raptosh says reinforces the narrative of her poetry in the book.

Raptosh will read from “Trio” live at the Nampa Public Library on August 24 at 6:00 PM. Rediscovered Books in Caldwell is hosting a virtual reading with Raptosh and Donovan, as well as fellow College alumna Keats Conley ’11, on August 26 at 7 p.m. Conley’s first book of poetry was also recently released, “Guidance from the God of Seahorses,” and is available through Bookshop.org.