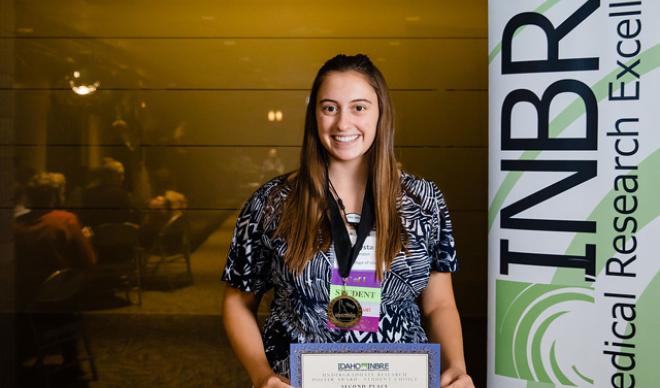 College of Idaho junior Caly Thurston didn’t go into the conference-ending dinner in Moscow expecting to leave with an award.

“I was pretty surprised,” said Thurston, who is majoring in biomedical sciences. “I knew that people at the conference were talking about my poster, but I didn’t go in (to the dinner) expecting to win. It was really exciting.”

The award was second place – out of over 100 competitors – in the student-choice category at the annual, state-wide INBRE (IDeA Network of Biomedical Research Excellence) conference over the summer. Thurston presented research on the effects of chemotherapy on tardigrades, commonly referred to “water bears.” There are six awards given, three in the student-choice category and three in the faculty-choice category. Flo Wavriel '19 earned an award the year before as the College continues to perform strongly at the conference, which includes students from eleven institutions from Idaho.

Thurston’s research centered on tardigrades because of their known toughness. The thought is, if researchers can unlock what makes tardigrades so resilient, perhaps those characteristics can be used to help people undergoing chemotherapy for cancers like glioblastoma. Her research was conducted over the summer under the tutelage of biology professor Luke Daniels as part of the INBRE program.

“What has impressed me about Caly is her original thinking and I think that’s one of the things that sets her apart,” Daniels said. “There was a lot of originality and creativity in this project and it was really something she came up with. It was something that she got excited about taking on.”

Thurston was part of a nine-person group representing the College at the INBRE conference. Daniels was joined by Tom Pirtle and Mark Gunderson from the biology department as faculty. Thurston was joined by fellow students Shanaya Fox, Cameron Coyle, Lindy Westendorf, Colt Merges, and Kathryn Craig as INBRE fellows. Each of the six students presented at the conference after the ten-week summer research period.

Quest: Advocate for Everyone
Sulong Becomes First Graduate of 2020
Quest: The Most Diverse 55-Acres in Idaho
Basketball’s Harwood Takes Open Shot in Chemistry Lab
In the News
View All News