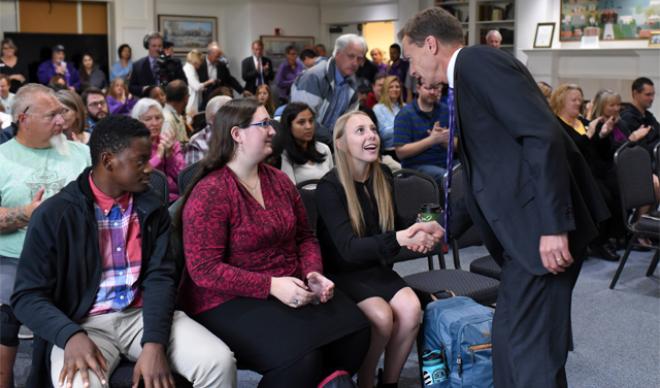 When Mike Halligan, the Executive Director of the Dennis & Phyllis Washington Foundation, stepped to the microphone inside Sterry Hall on Wednesday, it was the culmination of a year of work to benefit students at The College of Idaho.

“It’s the most gratifying, by far, part of my job. I can feel the passion in the room,” Halligan said. “Not only of the students but certainly of Doug (Brigham) and Jim (Everett), as the co-presidents, and then I can see around the room. I can see that this isn’t going to be something that just gets pushed off to the side and onto a shelf and then somebody gets a scholarship each year. These kids are going to have the support structure around them that they need to be successful.”

Part of that support comes in the form of the Horatio Alger Scholarships, which the Washington Foundation announced a $1.3 million commitment to fund at the College for the next eight years. The first five students are already on campus. Five more will be selected each year through the commitment.

“This scholarship has bridged the gap of the financial aid that I couldn’t receive from the College so I could come here,” said freshman Robyn Griffitts-Harper, one of the inaugural recipients of the Horatio Alger Scholarship. “I knew I was going to come here and I knew that the reality would be that I’d have to take out student loans but, because of this, I didn’t have to.”

The Horatio Alger Scholarships not only focus on students with financial need, but those who have faced and overcome great obstacles in their lives. The College identifies candidates who have already been admitted and encourages those students to apply directly to the Horatio Alger Association. The Association then vets the applicants and selects the recipients. Each student will receive $13,000 per year for each of their four years at the College and recipients then have the ability to apply for an additional Horatio Alger Graduate Scholarship if their studies lead to advanced education.

The Washington Foundation’s involvement stems from Dennis’s own humble beginnings, coming from a situation where he needed some help to get started. Now, the Foundation is the one providing that helping hand to people who need it to realize their college dreams. The conversation started approximately a year ago, Halligan said, when Brigham and Everett contacted the Foundation about a possible partnership.

“It was not a tough sell because they already had goals that were aligned with our goals,” Halligan said, noting that the Foundation had already researched the College before the initial meeting took place. “It was just a matter of, ‘how are we going to structure the scholarship to make sure that we could help the broadest range of kids, no matter what field they wanted to study?’”

Griffitts-Harper hasn’t declared a major yet, but is considering international political economy. The work done between the College, the Washington Foundation, and the Horatio Alger Association created the help that was needed for her and four of her classmates.

“I was very excited,” she said of the response when she learned she had been awarded the scholarship. “It was a good day.”