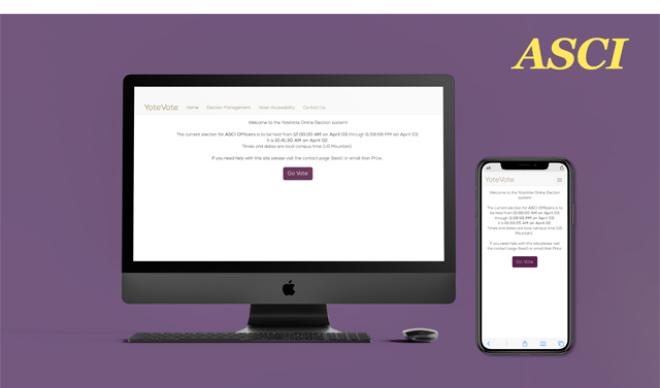 The campus is much emptier than usual as most students have gone home. Classes are being taught online. Students who remain on campus are getting their meals in to-go containers. Events have been canceled.

But the Associated Students of The College of Idaho (ASCI) student elections for the 2020-21 academic year are still taking place on Friday, April 3.

Just like normal, because the ASCI elections have been online-based for several years.

“In an environment where almost nothing feels ‘normal’ anymore, it is great that student life carries on as it always has in elections,” said Savala DeVoge, the director of student involvement. “I recognize that we have to change a few things in how we facilitate events leading up to elections, but the fact that students can still fully participate in the election process and choose their upcoming leaders is a great benefit.”

There were some adaptions that had to be made, but the election itself will be the same as it has been.

“Luckily, students already vote online in elections through our YoteVote platform, so what may have been the biggest hurdle is taken care of,” said Blake Cowman, the chairman of the College’s Election Board. “We had to replace the physical declarations of intent (to seek an ASCI office) that we typically use with an electronic one.”

The YoteVote platform was devised by Alan Price ’10 when he was a student at the College. Most are more familiar with Price in his current role as the assistant director of Information Technology. It was first used in 2008 and, despite minor hiccups, has never failed.

“From the start it was designed to accommodate students around the world with different levels of connectivity, including what was then 2G/3G mobile data,” Price said. “A few years ago it was redesigned to be more mobile-first. Those are both really being put to the test now, and I think it will prove itself once again.”

There have been a couple other changes to the process. Campaigning is much harder with the student body dispersed due to COVID-19 precautions. Cowman said the Election Board has gathered brief campaign messages from each candidate to distribute to students. There will also be an online debate that students can watch Thursday night prior to casting their votes. The debate will begin at 7:00 p.m. (Mountain) with Cowman serving as the moderator.

The voting window is open for 24 hours. Once voting has closed, the Election Board will notify the students of the winners on Sunday, April 5th. Then, DeVoge says, the College will go to work on preparing the newly-elected student leaders for their roles.

“I’m hoping that, because students are finding a new rhythm in engaging with the college online, through classes and small meetings, that we’ll have a high voter turnout,” DeVoge said.

“In the past, we’ve had two-thirds of students vote in the spring elections,” said Cowman, who is graduating in May with a degrees in political economy and environmental studies. “I hope to meet or exceed that number this week.”

Here’s a list of the offices and candidates for each office:

(Update: You can find out which candidates were voted in by their peers by visiting the ASCI Representatives page)