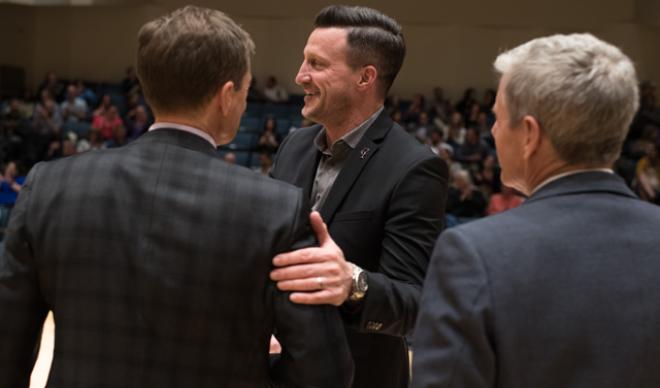 And right there, amidst some of the biggest names in higher education, you can also find The College of Idaho.

The list is the 2020 National Association of Student Personnel Administrators (NASPA) Pillars of the Profession, which includes the College’s Vice President for Student Affairs and Dean of Students, Paul Bennion.

“Somehow I slipped into this year’s class,” Bennion said with a smile. “These are your colleagues who are nominating and recognizing your contribution to the field, so that’s what is really cool.”

The award honors distinguished individuals who have served as leaders, teachers, and scholars in student affairs and higher education. The winners are nominated before undergoing a thorough and rigorous vetting process by the NASPA foundation board prior to final selection. NASPA, the professional home for the field of student affairs, supports approximately 15,000 people at 1,200 institutions across the globe.

“The people I know who have been Pillars are people who are fairly iconic in the field,” Bennion noted. “So it was humbling (to earn the award).”

Humbling for Bennion, exciting for those close to him on campus.

“Paul has been influential in helping me to reframe what is most important in my work with students: to lead with goodwill, authenticity, and professionalism,” said Jen Nelson, the College’s Director of Residence Life and Associate Dean of Student Affairs. “He is extremely busy, as he has integrated his administrative and teaching responsibilities at the College, his service work with NASPA, his volunteer community work, and his role as a partner and father into a rich and complex life, yet he continues to prioritize time with students to help them as they develop.”

Bennion completed his undergraduate degree at Willamette University before getting his master’s degree at Boston University. He then earned his Ph.D. from the University of Idaho. He first came to The College of Idaho in 1998 as a Director of the McCain Student Center, which focused on student affairs, as it still does today. He was the first person to move into the newly remodeled building, which had been empty after previously serving as Kirkpatrick Gymnasium on campus. Over the years, his work earned him promotions to interim dean to the full-time Dean of Students before ultimately adding the role of Vice President in 2008 under then-President Bob Hoover.

“Higher education is dynamic, sometimes we think higher education doesn’t change that much but it really does,” Bennion said. “The students change, the dynamic changes, the national and local environment causes our job to change pretty regularly.”

Bennion was quick to point out that his individual recognition is a result of campus-wide support, particularly his staff in Student Affairs.

“I have a lot of admiration for Paul and the way he has chosen to live his life,” Nelson added. “I know that through his career and the decisions he makes, he is working to do the most good that he can.”

Bennion’s nomination letter was written by Lincoln Johnson from the University of Washington and was supported by Henry Gee (Rio Hondo College), Nancy Youlden (Washington State University – Vancouver), and Kari Ellingson (University of Utah). Like Bennion, all four work in student affairs/student life, and all were effusive in their support for him.

“Paul is a tremendous friend and colleague and I look forward to continue learning from and working with him for many years to come,” Johnson wrote in his nomination letter. “He is a shining example of what it means to be a dedicated higher education citizen and, most importantly, brings an unrelenting focus and commitment to students and their success.”

You can read the entire nomination letter here.

The College of Idaho has a 128-year-old legacy of excellence. The College is known for its outstanding academic programs, winning athletics tradition and history of producing successful graduates, including seven Rhodes Scholars, three governors, and countless business leaders and innovators. Its distinctive PEAK Curriculum challenges students to attain competency in the four knowledge peaks of humanities, natural sciences, social sciences and a professional field—empowering them to earn a major and three minors in four years. The College’s close-knit, residential campus is located in Caldwell, where its proximity both to Boise and to the world-class outdoor activities of southwest Idaho’s mountains and rivers offers unique opportunities for learning beyond the classroom. For more information, visit www.collegeofidaho.edu.