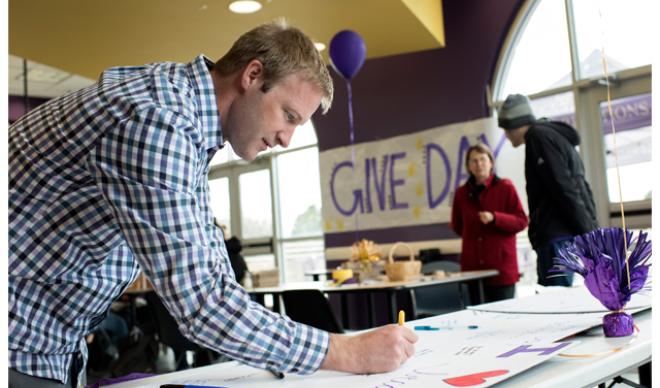 “It was a big day,” he said Wednesday morning, on the heels of The College of Idaho’s third annual Give Day.

Give Day is a 24-hour event where people have the opportunity to donate back to the College to raise funds for the departments, programs, and maintenance of the school. Those funds were augmented through matching gifts and challenges from other donors. The end result was the best Give Day yet.

“It’s a big number,” Cafferty said, happily. “I think it’s a testament. We might be a small school, we might have smaller numbers of alumni (than larger institutions) but, when our alums are called upon, they come together and they show their support in huge ways.”

CLICK HERE to see a brief recap of the event.

Cafferty praised the people who helped bring the entire day together, specifically Boone Fund Director Lauren Schilli and Development Manager Rebecca Wilhite, as well as volunteers who assisted with on-campus events and also made phone calls to help The College of Idaho reach the level of success.

The Class of 2015 led the way in total number of gifts, followed by the Classes of 1966, 1978 and 2001. Over 100 gifts were made to the school’s Boone Fund, named for the College’s founder, Dr. William Judson Boone, an unrestricted giving fund which supports ongoing operating needs at the College. Contributions were made to the Dr. Gerald M. Baur Memorial Scholarship, the Dr. Frank Blood Memorial Scholarship, and the Sigma Chi Endowed Scholarship, to name just a few. Alum Scott Hurter ’87 pledged matching funds to support the men’s soccer program and the Crookham Company also pledged matching funds to support the College. And that’s not nearly the entire list.

“It took a wide range of College of Idaho alumni to come together,” Cafferty said. “We’re particularly happy at the large number, almost 450 folks, who contributed to make the day such a success.”