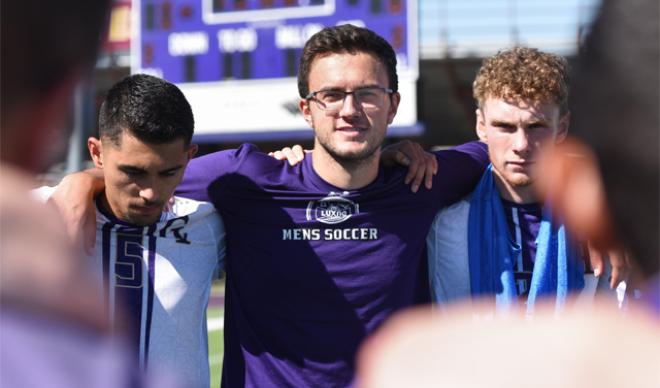 The following is from Quest Extra, an extended version of the original story from the Fall/Winter issue of Quest Magazine. To view the this issue or to read other longer-form versions of past Quest stories, click here.

When Adnan Sose was meeting the soccer team on a recruiting visit, Cole Fuller approached him and said, “merhaba,” which is a Bosnian Muslim greeting that means, “I greet you as a friend.”

Sose, then a senior at Twin Falls High School, is a Muslim. But he was born and raised in the Magic Valley, not Bosnia. Even so, Fuller’s gesture helped kick start a love affair between Sose, his team, and the College that continues to this day.

Though Sose was born and raised in Idaho, his ties to Bosnia are tight. His parents are both Bosnian and it remains the predominant language in the family home. He has traveled to Bosnia multiple times to see family and what would have been his homeland – if not for the country’s civil war in the early 1990s.

His father, Emir, was working in aeronautics in the country while his mother, Amela, was in college, studying engineering, when war took over in 1992. Emir was sent to a concentration camp for three months before the Red Cross came in and offered him an opportunity to leave the country and start anew. So Emir took that opportunity, choosing the United States without knowing where exactly he’d end up, leaving the war-torn region behind. He arrived in Twin Falls, a city of about 50,000 people 120 miles southeast of Boise, in December of 1993.

“A lot of malnutrition, a lack of food, my mother’s house got burned down twice, my father’s belongings, family photos, it all got destroyed during the war,” Sose said of his family’s path to Idaho. “My father came to the U.S. with twenty dollars in his pocket.”

Amela was not able to reunite with her husband until 1995, when she joined Emir in southern Idaho. The family has been in Twin Falls ever since. The city was a prominent destination for a large number of Bosnian immigrants, which helped the family acclimate to its new surroundings in the early years. Sose’s parents took multiple jobs in labor/manufacturing and housekeeping to allow their two sons – Sose’s younger brother is a freshman at Canyon Ridge high school in Twin Falls - the best possible chance at success. He talked of seeing Emir come home from one job, rest for a short time, and then leave to work nights at a second job while Amela, fresh off a full day at her job, made dinner for the boys and made sure other household chores were taken care of. A long, hard journey for both parents to make a better life for their family.

“They made a lot of sacrifices, took away a lot of luxuries that they had to allow for me and my younger brother to enjoy life without having to worry about many things,” Sose said. “So, once college came around, I was able to pick and choose where I wanted to go to school.”

That led him to the College, where he is double-majoring in international political economy and business. He plans to attend graduate school and would like to work in diplomacy in the Balkan region, where his family came from.

“What the College does an excellent job of is bringing together such a diverse group of people,” he said. “There are a lot of clubs, programs, and events that allow people to share their cultures, their foods, and their experiences with the community and the rest of the College.”

For him, The College of Idaho provides a chance for him to finish the college education that his mother didn’t get to finish when the war broke out.

“She says she wouldn’t trade it for the world,” Sose said. “She feels like she helped put me on the right path.”

The adjustments for the family were immense. Not only were there language and cultural barriers to overcome, but the distance between the families was difficult. Relatives would come to visit and differences between Bosnia and the Magic Valley were discussed, including one difference he remembers his grandfather talking about during a visit in 2004.

“One thing he was blown away by was how wide the roads are here,” Sose said with a smile, describing Bosnia’s narrow roads. “I know, it may be a silly thing, but the road width was really interesting to him.  Here, it’s so open, it’s so wide. Everything is so big.”

Sose is a third-year member of the College’s soccer team. As it turns out, two of his teammates, Bekir Cinac and Ahmet Huremovic, had similar experiences growing up, with Bosnian parents who fled their native country in the hopes of a more peaceful future in America. The trio have become good friends through soccer and the College.

Sose may not lead the team in goals but head coach Thom Baker says the junior’s impact on the team is immeasurable.

“I’ll vote for him when he runs for office and I hope I’m there for a wedding because he’s just that kind of kid,” Baker proudly stated. “He means that much to me because he’s such a good person and he’s what we try to get here at The College of Idaho. When he’s gone, I’m going to miss him tremendously.”

The feeling is shared by Sose’s teammates, of whom Baker says he is “wildly popular with the guys.” Sose is just as fond of the team, the College, and the community.

“I’m in an ideal place right now where a lot of people would want to trade shoes with me,” Sose said. “I’m very thankful for that and I use it as motivation to keep pushing forward.”