Fall 2020 Updates: The College is in Phase 4 of its re-opening plan, allowing for additional on-campus activities. Read More 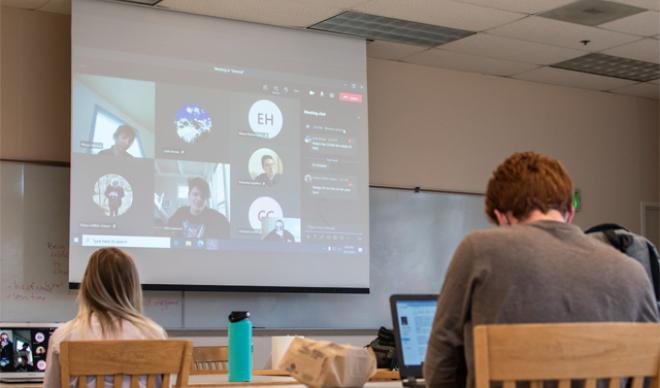 The College of Idaho’s Speech and Debate team, the Howlin’ Yotes, broke away from their usual Tuesday-night schedule last week to watch the first Presidential debate on television.

“It really drove home the difference between a debate and arguing,” Cheesewright noted. “We had some students who were really excited to talk about the content of what each of the speakers were saying. The problem was, there just wasn’t much content to discuss.”

So the group gathered again Thursday night, ready to resume their own preparations for the next event for the College team.

At the Carroll event, two teams from the College reached the final round. Sophomores Titan Walker and Robyn Griffitts-Harper placed third overall, while senior Gabriel Hall and junior David Luke teamed up for a fourth-place finish. The online-only format presented some challenges for the team, leading to adjustments for coach and competitor alike.

“It’s much more difficult for me to give advice and interface with everyone who is preparing for their stuff,” Cheesewright said. “I have less direct support for students during their preparations for any individual debate.”

Walker agreed. The debates themselves take place on a platform called Yaatly, which was designed specifically for speech and debate. That lessens the impact on the event itself, but not what occurs outside of the speeches.

“Debating online has been a very different experience,” said Walker, a Business Administration major. “The actual debates function basically the same as in person but the social aspect of the event is gone, without the platform to talk to our own or other teams. There is really no way to have conversations before or after rounds.”

Walker and Griffitts-Harper represented the College in the Rice event, advancing from the preliminary rounds to the single-elimination portion of the tournament, called partial double octofinals. Cheesewright compared it to the “Sweet 16” of the annual NCAA basketball tournament. He carried the basketball comparison even further, saying that speech and debate events bear some resemblance to an entire basketball season played over the course of just a few days.

“We’ll begin competing at 8 a.m. and continue competing until 8 p.m. pretty regularly,” he said. “It’s an academic, competitive event that plays out over the course of an entire year. We typically start competing in September and we will continue to compete until March or April. You spend your whole weekend, sometimes longer, doing these events.”

Within the events, teams and individuals often have little time to prepare for the next round. It can be as little as fifteen minutes while the competitors may not immediately know what the next round’s topic will be.

“The topics at our last tournaments ranged from ‘Defund the Police,’ ‘Existence precedes essence,’ and ‘India should substantially increase rural internet access," said Griffitts-Harper, a History and Spanish double major. “This creates an incredible amount of breadth, as Kyle noted, with only about 20 minutes to research and prepare a position you might have formerly known absolutely nothing about.”

Cheesewright calls the events “a pretty intense experience.” It requires strong knowledge of current events, both domestically and globally. Students who participate in Speech and Debate meet Tuesday and Thursday nights and are graded on a cumulative pass/fail basis.

Speech and Debate has been around the College since at least 1912. Click here for more information about the Howlin’ Yotes.

The College of Idaho has a 129-year-old legacy of excellence. The College is known for its outstanding academic programs, winning athletics tradition and history of producing successful graduates, including seven Rhodes Scholars, three governors, and countless business leaders and innovators. Its distinctive PEAK Curriculum challenges students to attain competency in the four knowledge peaks of humanities, natural sciences, social sciences and a professional field—empowering them to earn a major and three minors in four years. The College’s close-knit, residential campus is located in Caldwell, where its proximity both to Boise and to the world-class outdoor activities of southwest Idaho’s mountains and rivers offers unique opportunities for learning beyond the classroom. For more information, visit www.collegeofidaho.edu.