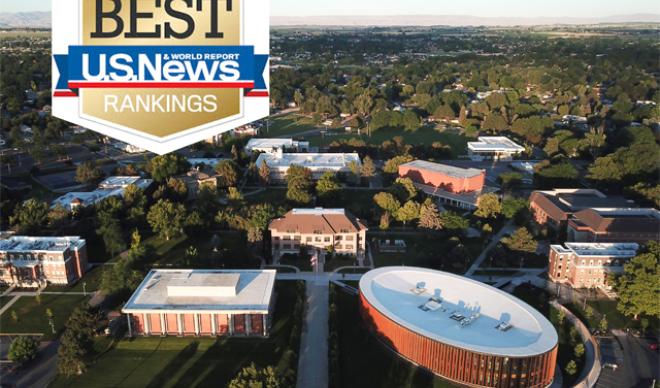 A year after moving up the national rankings by more places than any school in the nation but one, The College of Idaho has once again made a major impression in the 2020 U.S. News & World Report Best College Rankings, escalating another 14 spots to No. 117 in its list of “Best National Liberal Arts Colleges,” as well as being recognized as one of the top schools in the nation for social mobility.

Last year, the College was recognized in U.S. News & World Report’s coverage of the rankings as one of the schools making the most progress, as the College’s ranking jumped 37 spots from No. 168 in 2018 to No. 131 in 2019, the largest movement of any school but one, and the highest ranking ever achieved by the College. With an additional upsurge of 14 positions this year, the College has risen 51 spots over the past two years in recognition of the Best National Liberal Arts Colleges. The rankings are determined by a formula weighting data across 15 metrics of academic excellence, including graduation rates and first-year retention, faculty and financial resources, peer assessments, student excellence and alumni giving. The No. 117 ranking is now the highest achieved by The College of Idaho and is the highest national ranking of any school in the state.

New to the U.S. News categories this year is a web-exclusive ranking of the top schools in Social Mobility, which is generally defined as upward movement of students and graduates from one socioeconomic status to another. In this new category, The College of Idaho ranked as the No. 4 school in the nation. The only national liberal arts colleges in the nation ranking higher than The College of Idaho are Cornell College (Iowa), Agnes Scott College (Georgia) and Houghton College (New York). The Social Mobility rankings are determined in part by how well schools graduate students who receive federal Pell Grants (those typically coming from households whose family incomes are less than $50,000 annually, though most Pell Grant money goes to students with a total family income below $20,000).

“Social mobility in the U.S. has declined sharply during the past decade, and young Americans now have far fewer opportunities to find financial security,” said College of Idaho Vice President of Academic Affairs David Douglass. “In light of this downward trend, it is heartening to know that The College of Idaho continues to succeed in transforming the lives of students in need.”

College of Idaho Co-President Jim Everett agrees: “Earning a college degree has never been more important for helping young people to move up in socioeconomic status. We are excited to be recognized in the first-ever ranking as being best in the West.”

The College of Idaho also received a national ranking in the web-exclusive category of 2020 Schools with the Most International Students. The College ranks no. 21 among all national liberal arts colleges with 13-percent of its student body from outside of the United States. Last year, the College had 74 countries represented on its campus. With another large contingent of new international students in the College’s largest new-student class ever, which began classes just last week, the number of countries represented has grown to over 80, and the College will likely move up this list in the 2021 edition when this year’s percentage is used as the criteria.

“For over a decade, The College of Idaho has been committed to growing its international population and providing students with a global education and experience,” Vice President of Enrollment Management Brian Bava said. “To have over 16-percent of the student body representing more than 80 countries is something that no one would have expected from a college in Idaho. Seventeen new countries are represented in this year’s cohort – the largest freshman class and total number of new students ever in the history of the College. We are so proud to welcome these students to our campus and we look forward to following their many contributions to the community, state, and the world in years to come.”

The College’s national accolades have grown over the last few weeks, including ranking as the No. 1 school in Idaho by the Wall Street Journal for the third-straight year. Among the other recent notables:

A full list of the College’s recent accolades can be found here.

Roger Higdem Passes Away
Campus COVID-19 Updates from Co-Presidents
In the News
Quest: The Spirit of Serving Others
2020 Scholarship Gala Sets Record … Again
View All News