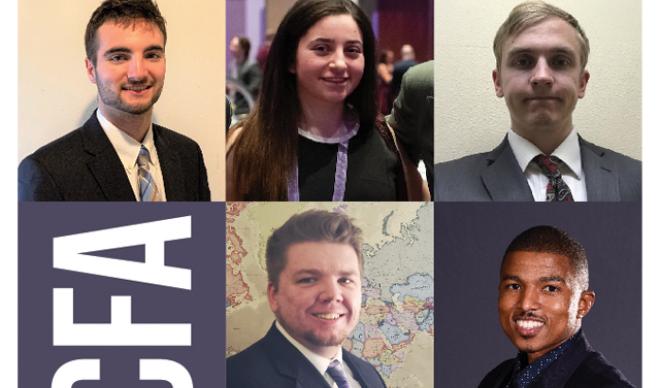 Rick Goodwin ’83 played basketball as an undergraduate at The College of Idaho, so he knows a thing or two about winning and celebrations.

But Goodwin, who is now a Business & Accounting lecturer for his alma mater, admitted he’s not sure what happens now that the College’s entry won the 2021 Chartered Financial Analyst (CFA) Challenge.

“We have never won before, so I don’t know the next steps yet,” said Goodwin, the team’s faculty advisor, with a laugh. “I’ve been doing this with teams for six years, it’s really exciting to win.”

Each school in the competition analyzes the same company. This year, the schools each studied Keytronic, a company headquartered in Spokane, Washington, that specializes in electrical and electronic manufacturing. The competition is broken down into two categories: a written report and an oral presentation. The College won the written report and finished a close second to the University of Idaho in the oral presentation. But the two scores combined to give The College of Idaho the top overall spot. The team has scored well in the past and has come close to the top spot, but this is the first time that the College has won the overall competition.

However, there was no cutting down of the net. There was no celebration photo. It was a virtual competition, so the team found out separately that it had won. Goodwin said the team gathered later to discuss the event and has already begun to prepare for the next round with the help of industry mentor Molly Guenther.

“We received the news of our victory via email roughly two hours after the event,” said junior Riley Cottom, who served as the team’s captain. “The team wasn't able to meet until much later that night. When we did, there was a lot of energy, and it felt like our hard work had paid off. We had the online-meeting equivalent of a party.”

With the win, the College advances to the sub-regionals, where all of the local winners are randomly placed into two groups to compete against one another. The winners of the two sub-regionals advance to a regional event, which is comprised of the Americas – North, South, and Central – to compete for a spot in a global CFA competition. The team met nightly, starting at 10:00 p.m., for the past two months to prepare for the first competition. The members also put in time individually which, according to Cottom, pushes the total number of hours spent preparing “well into the hundreds.”

It also allowed the team members to prepare for life after college.

“Going into the competition, I thought the challenge would test the skills I had learned in accounting and finance classes,” said Cottom. “It definitely did, but the challenge also improved my ability to work with a team, especially in a leadership role. Professionally, I think being able to coordinate with team members to accomplish something is a skill that will benefit me and the other CFA'ers greatly.”

The five team members change each year. They’re not allowed to compete more than once. Goodwin noted that this year’s team had two international students and one female (many teams do not have a female competitor). He said he’s already got next year’s team lined up and there will be three females representing The College of Idaho in next year’s CFA competition.

“Not only are we competing against bigger schools, often we’re competing against students that have already graduated and are getting their advanced degrees,” said Goodwin. “The caliber of students we have at The College of Idaho, they are so dedicated. They’re so amazing.”

This year’s team members and their major(s):