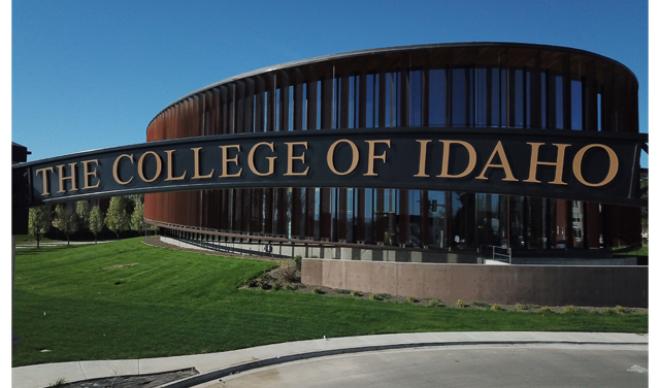 The year 2020 presented a slew of challenges to almost everyone. The College of Idaho was not immune but the school grew in a positive way in spite of the obstacles.

The COVID-19 pandemic shut down campus in March, forcing the College to adjust to online learning to finish out the Spring semester.

One of the biggest challenges for the College with the COVID pandemic was figuring out how to accomplish that with minimal time to plan or strategize as the pandemic began to spread. The College’s Information Technology department shouldered much of the load, preparing faculty and students alike for remote learning.

Provost David Douglass said the College will continue to improve its technology in order to provide the best online education it can. Better cameras and better microphones, among other things, as the College will enter the Spring semester in Phase 4 of its re-opening plan. That allows students to attend some classes, like science labs, in-person but most of the courses will remain online until it is determined that it is safe for faculty and students to return full-time to the classroom. Some students are living on campus but many are living and taking classes remotely.

The College added four new members to its Board of Trustees – all women, as the College now has nearly the same number of women as men on the Board.  Leadership, with input from the campus community, has taken many steps to increase diversity and inclusion. Not just among students, too, as strong, talented people of color were added to prominent roles on campus. Latonia Haney Keith was hired as the Vice President of High Impact Practices, where she will help the school blur the line between college and career by strengthening the College’s commitment to research, internships, and study-abroad programs, among many things. In early September, the College announced Arnoldo Hernandez was promoted to Assistant Dean of Students, Mike Shines was promoted to Life Coach, and Aman Gill was hired as the College’s multicultural counselor. Kollin Walker expanded his role on campus to become the school’s first LBGTQ+ Coordinator. All five are people of color.

All of these things – the hard work, the technology, the diversity, the new hires – position the College to continue doing what it already does well: preparing students for successful lives. In September, it was announced that U.S. News & World Report ranked The College of Idaho as the top college in the country for social mobility, which is generally defined as the upward movement of students and graduates from one socioeconomic status to another. The ranking evaluates which schools best serve underrepresented students. The College has received numerous accolades over the years but this represents the first time it was tabbed as the best in the nation by U.S. News and World Report, which is considered the gold standard in college rankings.

The College welcomed more than 300 new students to the YoteFam for the Fall semester, giving the school its third-highest enrollment ever. The College also opened its two newest housing facilities, Sawtooth and Owyhee, the innovative and sustainable modular dorms that were constructed out of decommissioned shipping containers by local company indieDwell. Thousands of dollars were raised to support international students who couldn’t go home and had to stay on campus during the summer or over the current winter break. The annual “Give Day” event, a once-a-year event where friends and alumni are encouraged to make gifts to the College that are often “matched” by other friends or alumni, set a new record by drawing nearly $290,000 in gifts despite being held entirely online during the pandemic.

“To see the outpouring of support from 581 alumni, faculty, staff, parents, and friends of the College is unprecedented,” said Jack Cafferty, the College’s vice president of College Relations, once the numbers were tabulated in May.

Like most other colleges and universities, The College of Idaho wasn’t able to host an in-person commencement ceremony to honor the graduating class of 2020. However, a “virtual” graduation ceremony was produced in its place.

Where there’s a Yote, the most recent issue of Quest Magazine displayed, there’s a way.

“Times of challenge are also fertile for generosity, empathy, learning and change,” said College co-president Jim Everett. “Thanks to all who have inspired us with your kindness and your generosity.  With your continued support, we will take what we have learned this year and we will work hard to make the college an even better place for all of us proud to call ourselves Yotes. We will continue to send graduates into the world who are global citizens, committed to making the world a better place.”

The College of Idaho has a 129-year-old legacy of excellence. The College is known for its outstanding academic programs, winning athletics tradition, and history of producing successful graduates, including seven Rhodes Scholars, three governors, and countless business leaders and innovators. Its distinctive PEAK Curriculum challenges students to attain competency in the four knowledge peaks of humanities, natural sciences, social sciences and a professional field—empowering them to earn a major and three minors in four years. The College’s close-knit, residential campus is located in Caldwell, where its proximity both to Boise and to the world-class outdoor activities of southwest Idaho’s mountains and rivers offers unique opportunities for learning beyond the classroom. For more information, visit www.collegeofidaho.edu.